JST technology as the basis for the " multi dispatcher".

JST DisplayWall: A large display wall visualises the most important events for the operator team in the technical control center of the "Competence Center Surface".

With a new “super control center“, Berliner Verkehrsbetriebe (BVG) is ensuring that its operations run smoothly. The abbreviation “KCO” stands for “Kompetenzcenter Oberfläche” (“Competence Center Surface”), which has 160 employees and combines the bus, tram and technology control centers. Jungmann Systemtechnik – JST was significantly involved in the realisation of this future-oriented project. Objective: Passengers in particular should benefit from the pooling of resources and the new concept in traffic control and monitoring.

“First of all, we carried out an analysis of the market. Of course, we were pleased that the market leader was ultimately awarded the contract as a result of our tender,” says Lars Kramer, sub-project manager for IT technology, explaining the path to JST. For the specialists from Jungmann, the BVG managers then had a very specific challenge: in addition to merging the previously separate control centers for bus, tram and technology, the possibility was to be created of combining two different systems (bus and tram) at just one workstation so that they could be operated by just one dispatcher.

MultiConsoling® is the perfect solution

The perfect solution for this requirement: JST MultiConsoling®. This technology makes it possible for the new “multi-dispatcher” to access both systems by simply switching from one workstation. ” Previously, elaborate coordination between the individual control centers was necessary”, says project manager Antje Michalak, “this merging drastically shortens the information paths and thus of course also the response times”.

JST large display wall: Large-screen technology from JST is used in the KCO’s technical control center to display the circuit diagrams of the Berlin transport services. The LC displays used by JST give employees the ability to display a picture very large and across frames as a big picture across multiple displays – ultra-thin frames and MultiConsoling® make this possible.

The operators of the technical control center interface (TLO) also benefit from the JST technology. A new large display wall has more than six 46-inch displays. Thanks to ultra-narrow frames, the displayed circuit diagrams are clearly displayed as BigPicture on the DisplayWall via the MultiConsoling®, if required. In this way, TLO employees can see perfectly which overhead lines are being worked on, for example. The team is visually alerted to where it needs to intervene in order to avoid disruptions to operations.

JST-MultiConsoling®: The heart of the technology is MultiConsoling®, with which all computers from the control center could be installed in a remote technology room. Advantage: less heat, less noise. In addition, the computers are – depending on access authorisation – arbitrarily connected by the operators to the large display wall and the monitors at the workplace and operated in real time.

“Thanks to the simple drag & drop application, the employees quickly got to grips with the system,” says Lars Kramer, praising the acceptance of the JST products by the BVG operators. For his colleague Antje Michalak, one thing is certain: “The entire project work with JST was very constructive and involved a high level of competence. 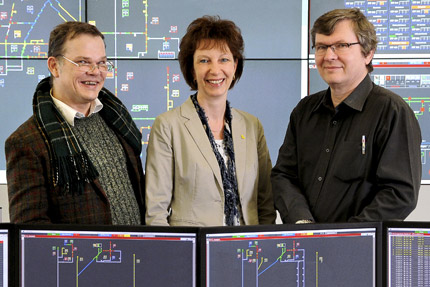 Satisfied faces of those responsible for the BVG project "Ground Level Competence Center": 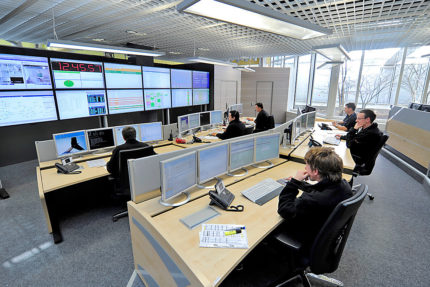 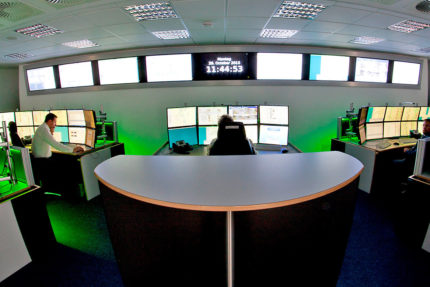