JST control center: Result of the core renovation - lots of glass, daylight and a technical as well as ergonomical perfectly coordinated overall concept characterize the new DREWAG control room. The mural that can be seen in the background has been preserved from the old control room. The representations are currently being renovated as part of a student project.

Structural changes in the company, the optimization of workstations and a complete modernization of the control technology – three important requirements that were to be realized at the Reick location of DREWAG – Stadtwerke Dresden GmbH.
As a partner for accomplishing this mammoth task, the DREWAG managers decided in favor of the control room specialists from Jungmann Systemtechnik after a thorough market survey.
The result: “A control room that can really be described as a precision landing,” says Tino Kuhnke (Group Manager Generation, Control Room).

It was originally designed in the 70s for the Reick heating plant– the control room in the district of the same name in Dresden.
But with the years and increasing requirements, the weak points became more and more obvious: lack of daylight, fragmentary extensions of the technical systems and last, not least, distributed over the decades, a permanently growing range of tasks.
“In the end, that was hardly possible,” says Tino Kuhnke.

Too many screens - too much load

The experts were especially worried about the large number of monitors to be monitored: Both DREWAG’s own plants from the power plant, biogas, hydroelectric, wind energy and photovoltaic sectors as well as external customer plants are monitored.
A separate computer for each system.
The operators should keep an eye on almost 30 screens.
System administrator Christian Helmholz comments: “The psychological strain on the employees was extremely high”.

Time for the "big break"

Time for a “big break”, as Tino Kuhnke calls the complete reconstruction of the control center in Dresden-Reick.
With the Jungmann team at their side, the people responsible at DREWAG were able to create a modern control room within the framework of a large-scale core renovation, which meets the latest workplace standards, can be easily expanded for the future and offers many a technical finesse.

JST Furniture: Ergonomics and flexibility of the top class.
Visual distances to the workplace monitors can be immediately and individually adjusted for each employee at shift change.
The table top has sufficient depth for keyboard and paper.
Lowering the monitors allows a relaxed head position and a clear view of large screens.
The EU standard DIN EN527-1 is of course fully complied with.

“We were already sure when we visited the JST Showroom: This is exactly the solution we wanted – as a complete system,” recalls project manager Andreas Rammer.
With the JST MultiConsoling® and the control software myGUI a comfortable and intuitive operation of the systems is now possible.

Changing places is a thing of the past

Tino Kuhnke sums up the decisive advantage of this technology: “In the past, employees had to change the workplace for operating the individual systems. Today they get the systems directly on their desired monitor.”
Also on the two newly installed large screen walls each image can be switched on as required. 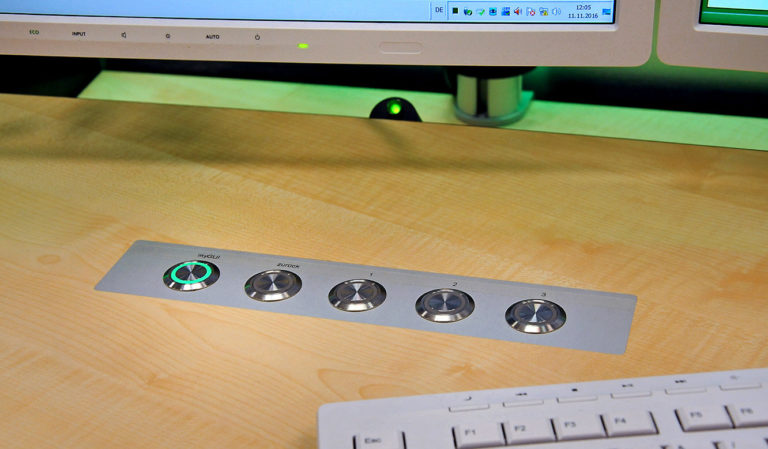 JST CommandBox: Recessed directly into the table top of the operator desks – the CommandPad for the JST CommandBox system.
At the push of a button, the buttons enable the desired scenarios to be displayed on the monitors at the workplace and on the large screen wall at lightning speed.

Any scenarios available at lightning speed

An additional plus point in the new DREWAG control room: The so-called CommandBox, with which any scenarios can be visualized at lightning speed on the workstation screens or on the large screen wall.
One push of a button is enough.
The necessary switching pads are embedded in the surfaces of the new ergonomic OperatorDesks from the JST-Stratos series.

The control room before and after modernization.

Andreas Rammer, Tino Kuhnke and Christian Helmholz agree: “When asked whether our problems have been solved, we can answer with a clear ‘yes’.
With the JST system, we can adapt absolutely flexibly to each customer, have a future-proof technology.“
The continuous competent support by Jungmann technicians, the adherence to the budget and the trouble-free conversion to the new software for the DREWAG employees are also praised.
” Outstanding work was done there,” Andreas Rammer summarizes the entire project. 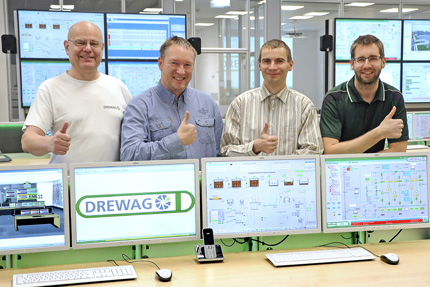 In Dresden, they are impressed by the new installation from JST: "We now possess a flexible and future-proof technology." 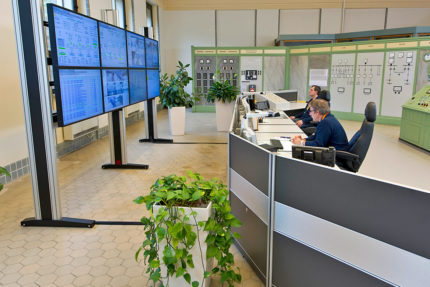 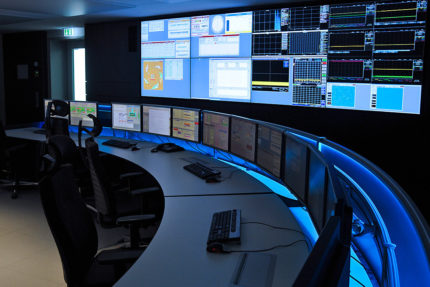 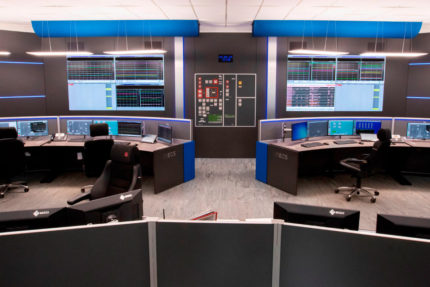