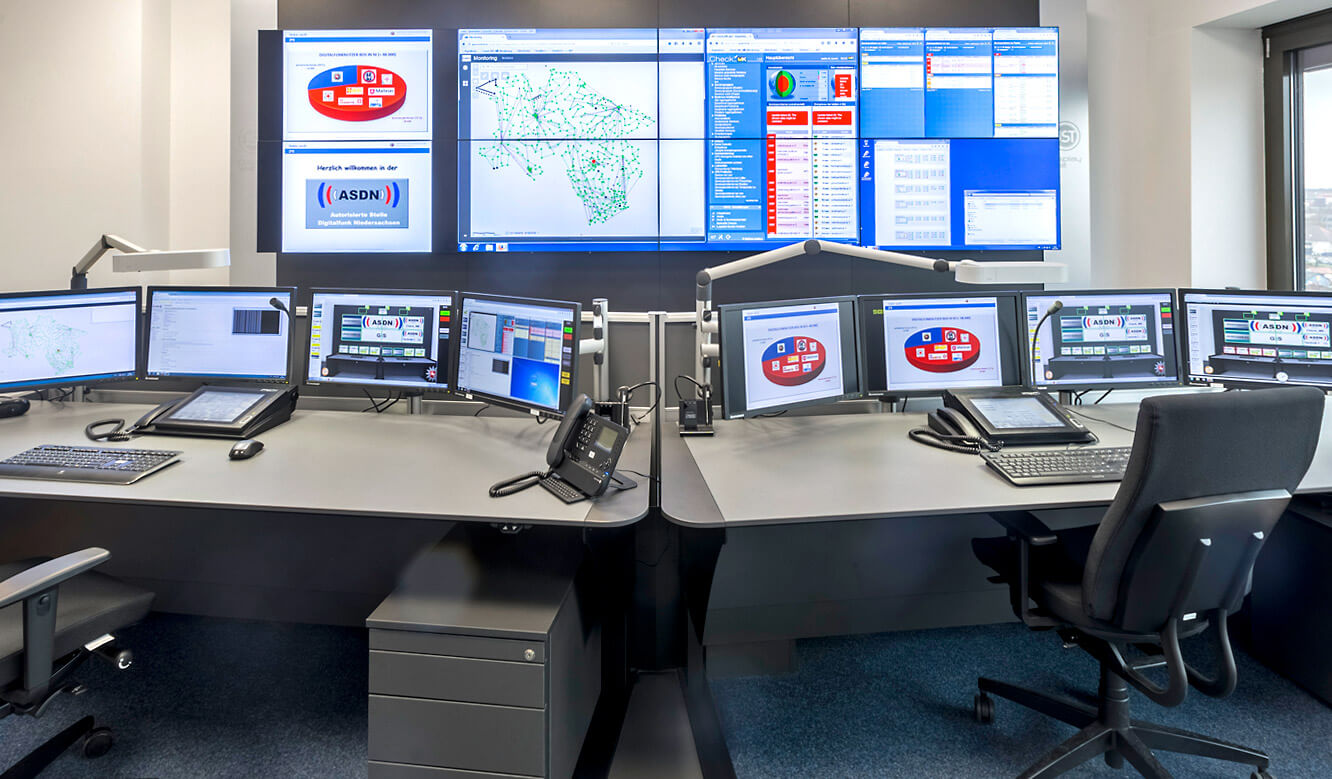 JST control center concept: In the control center of the Autorisierte Stelle Digitalfunk Niedersachsen (ASDN) the operators benefit from technical and ergonomically perfectly thought-out concept. Three rooms are controlled via a central system, and displays can be switched to the various proactive large screens as required.

Communication is the “A” and “O”. Digital radio is used whenever firefighters go out to combat a fire, a police patrol car is called to an accident, or even hundreds of people line up to accompany major events. The access network for digital radio in Lower Saxony is monitored by ASDN (Autorisierte Stelle Digitalfunk Niedersachsen), which is assigned to the Central Police Directorate Lower Saxony. With the support of Jungmann Systemtechnik an optimal basis for the monitoring tasks of ASDN could now be created.

On the one hand: A control center which, with its many individual systems, has been repeatedly adapted to the growing requirements in small steps over the years. On the other hand: Almost 50,000 users from public authorities and organizations with security tasks, who throughout Lower Saxony are dependent on a modern and consistently highly available digital radio network. The solution: The development of a future-oriented control center that enables the control of a wide variety of systems in physically separate networks, taking into account visualization techniques as well as optical alarm options, for example.

Security features and references have convinced

Just the right job for the specialists at JST. “Jungmann was able to meet all our requirements – in a single system,” says Stefan Wächter, head of the ADSN in Hanover. It was not only the important security features that convinced the head of department, “but also JST’s many references in this relevant segment speak for themselves”.

With MultiConsoling® all sources in view

Using the proven MultiConsoling® from Jungmann Systemtechnik, all video and audio sources can be displayed on the new proactive JST large screen walls in the new ASDN control room – for example, pending alarms in the base stations or the status of the access network.

JST Location Center: The location rooms in the ASDN are also directly connected to the main system via the JST MultiConsoling®. All representations and alarms can be routed here to be processed by a perfectly equipped team.

A particular advantage of this technology is that the images can be displayed as individual pictures on the display walls and at the workstations or as BigPicture on the Displays of the large screen wall. In the case of ASDN, this is even possible across three different rooms equipped by JST. Stefan Wächter: “A perfect and convenient solution, enabling us to separate our daily business from processing special situations without having to do without information”.

JST MultiConsoling®: The myGUI – shown here on the workstation monitor in room AAO – serves as the user interface for the JST MultiConsoling®. Special advantage of the system: It is possible to display any sources (computers, cameras, etc.) in real time on workstation monitors, on individual large screen displays or as BigPicture across several large screen displays.

No alarm is overlooked anymore

But for the 14 employees of the ASDN control center, the Jungmann team was able to realize another highlight: “Security of the alarm monitoring was significantly increased by the JST-PixelDetection®softwarereports project manager Stefan Wächter. The system automatically detects critical situations by means of pre-defined reference values and enables alarms to be displayed visually so clearly that no message can be overlooked.

JST Large screen technology: Just one of two proactive large screens that bundle all important information for the team of ASDN operators.

For the head of the ADSN, one thing is certain: “Our daily work is made much easier by the Jungmann system. Even specific situations – especially those that occur ad hoc – can now be handled much more professionally”. 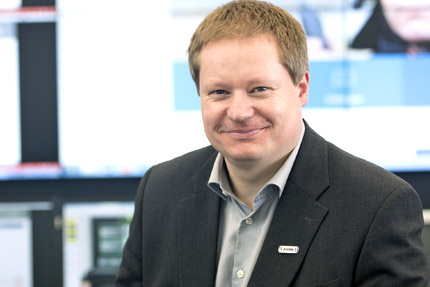 "The Jungmann system will make our day-to-day work much easier." 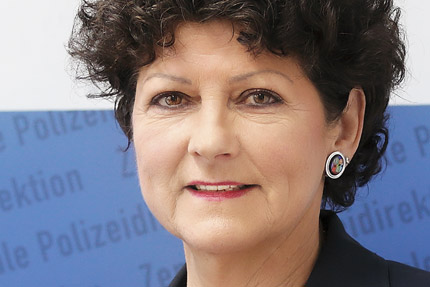 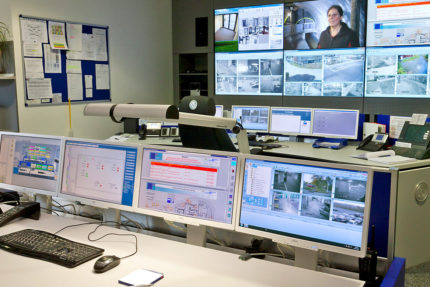