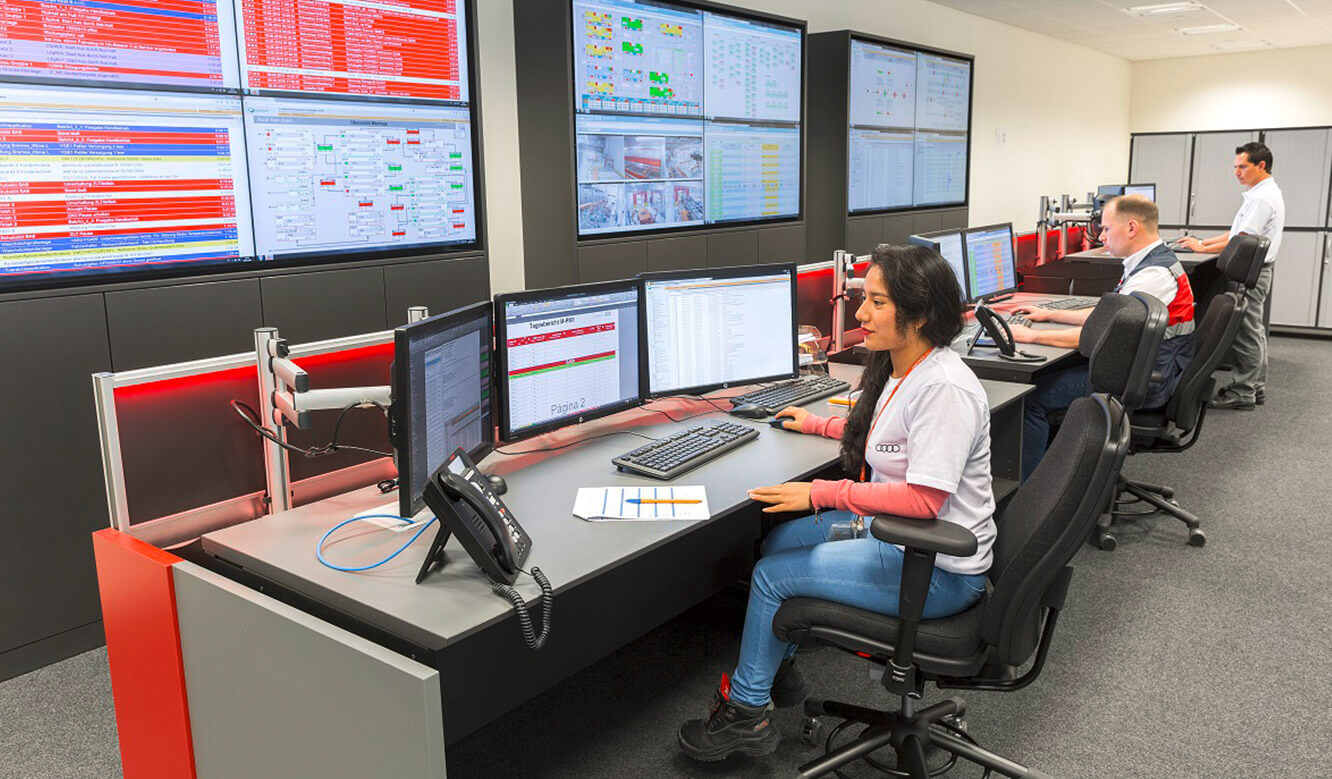 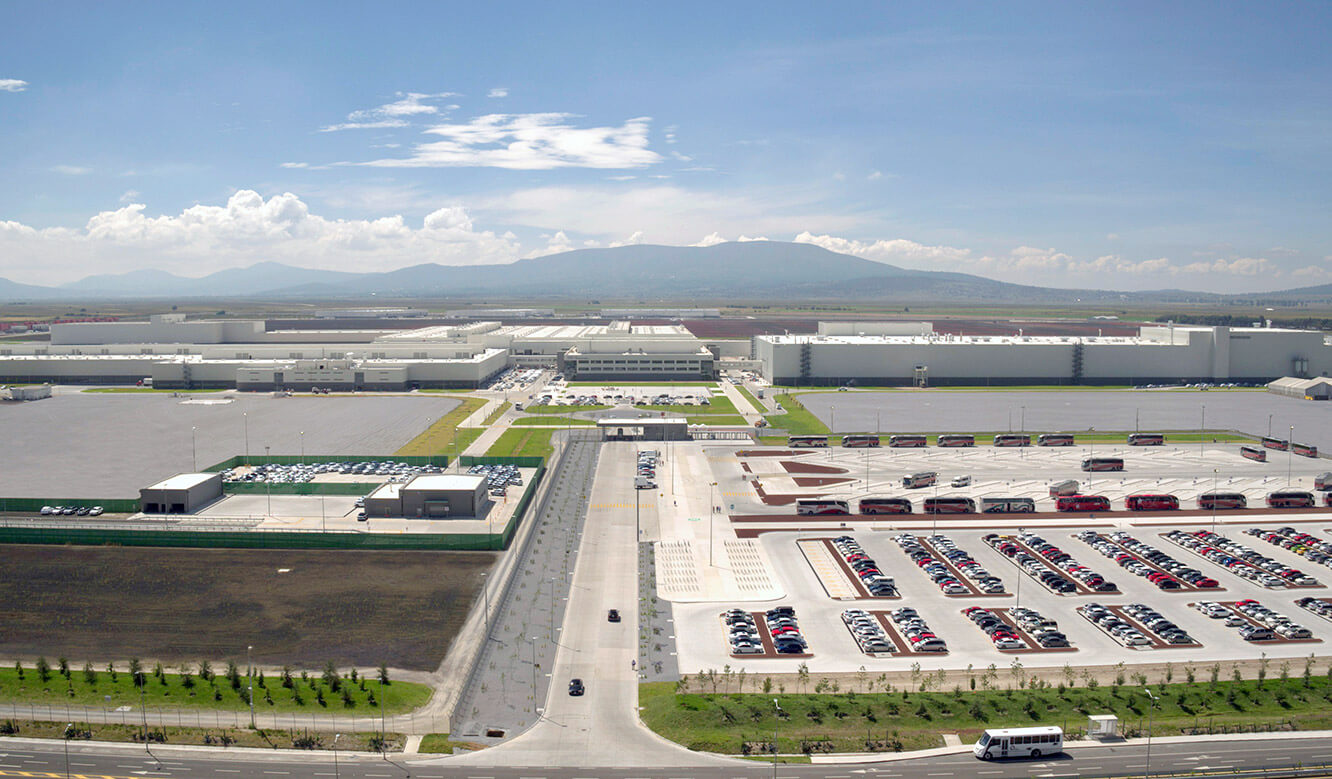 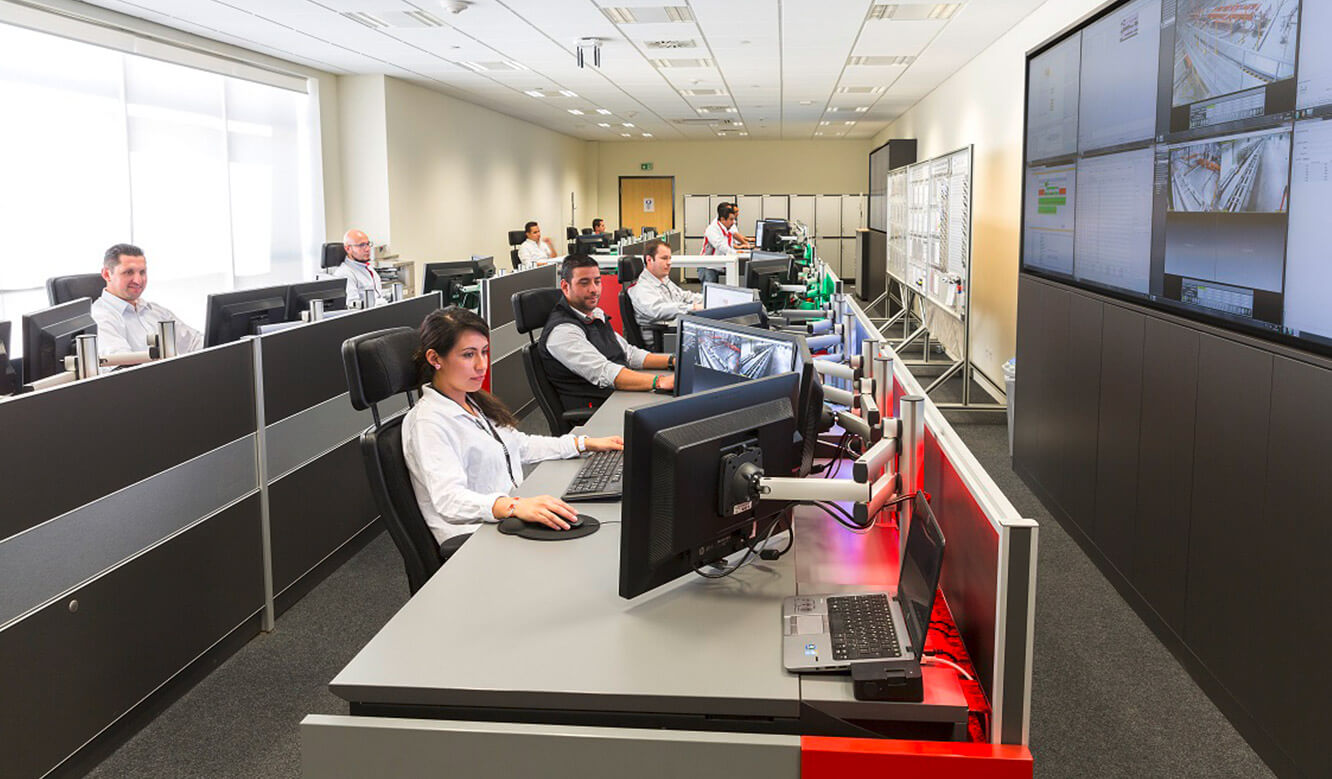 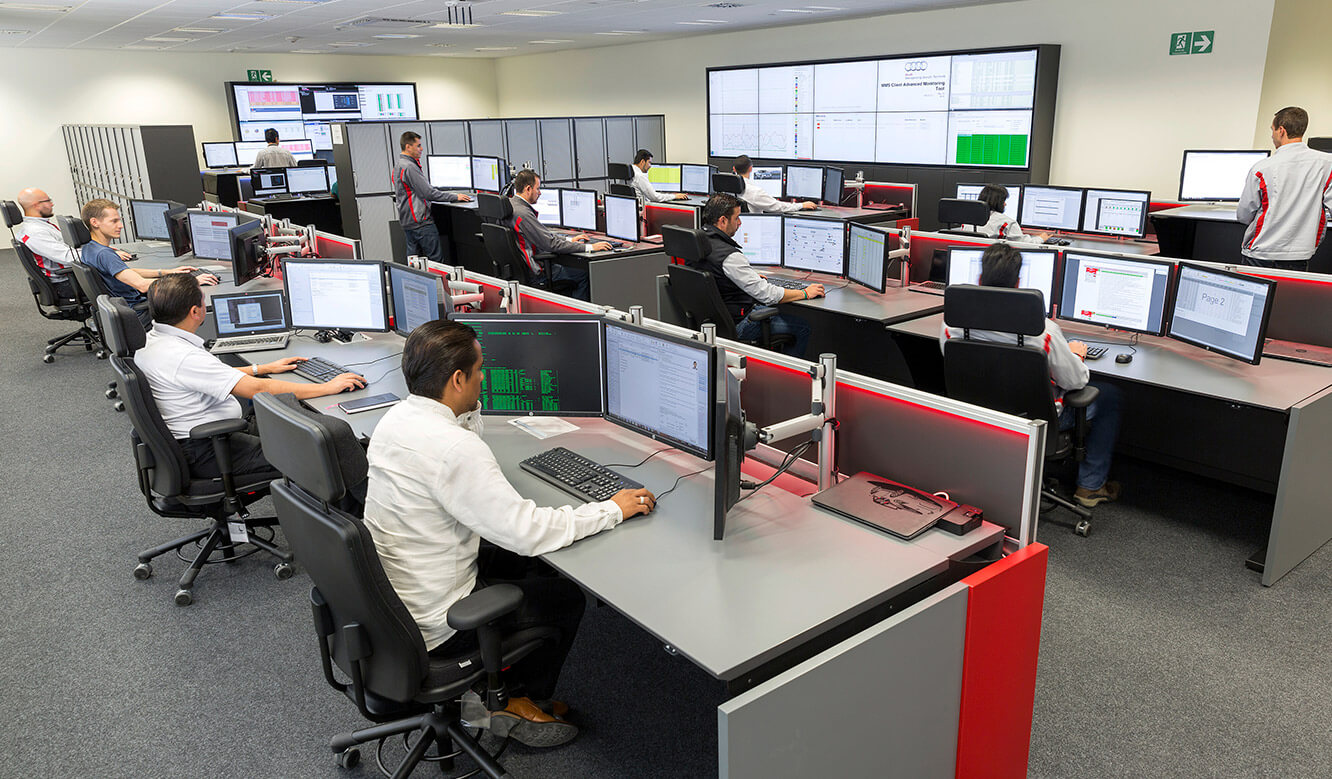 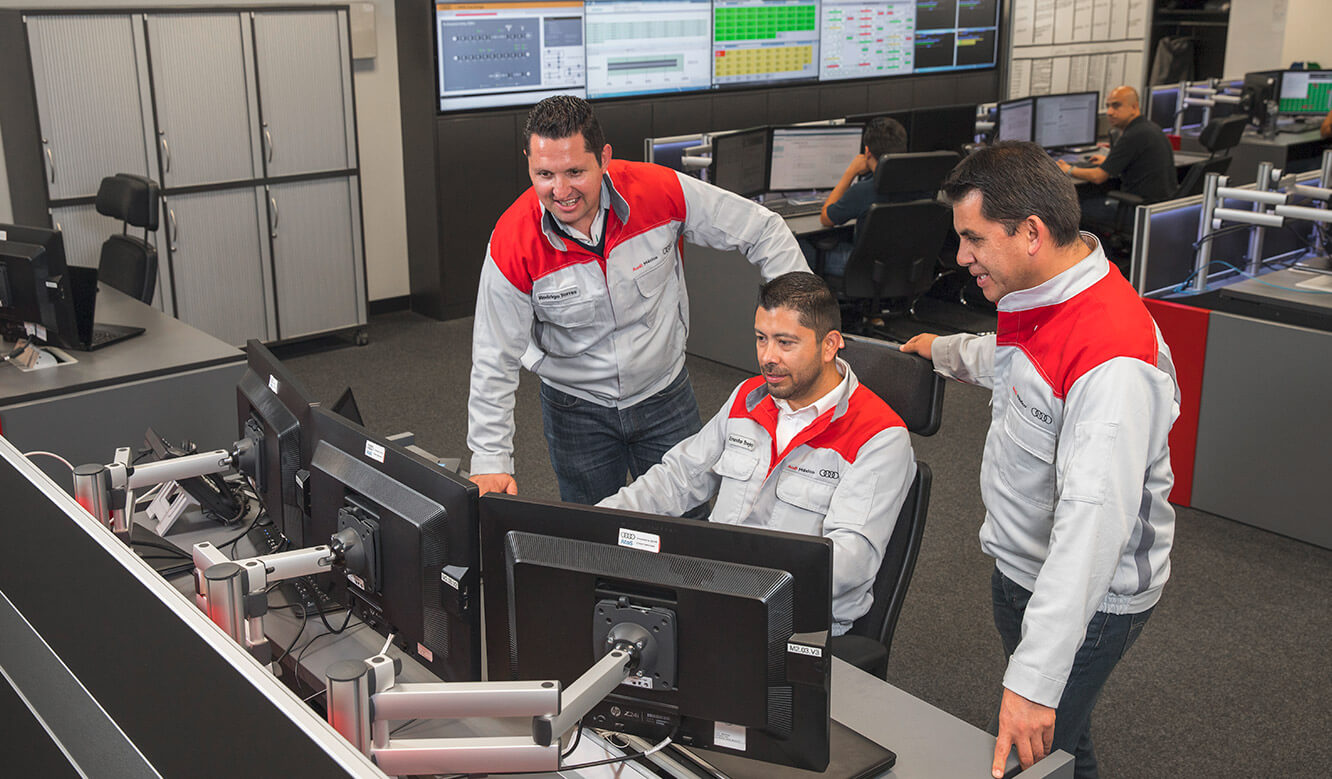 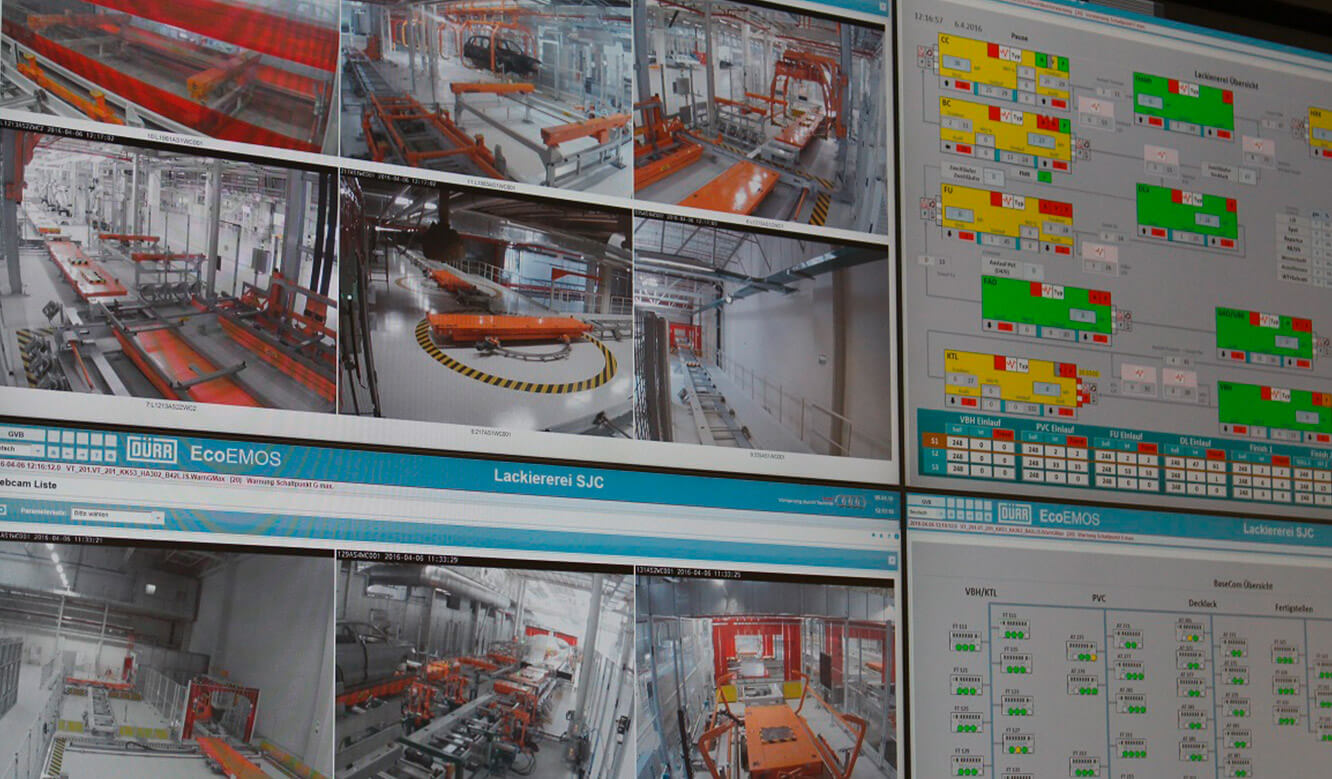 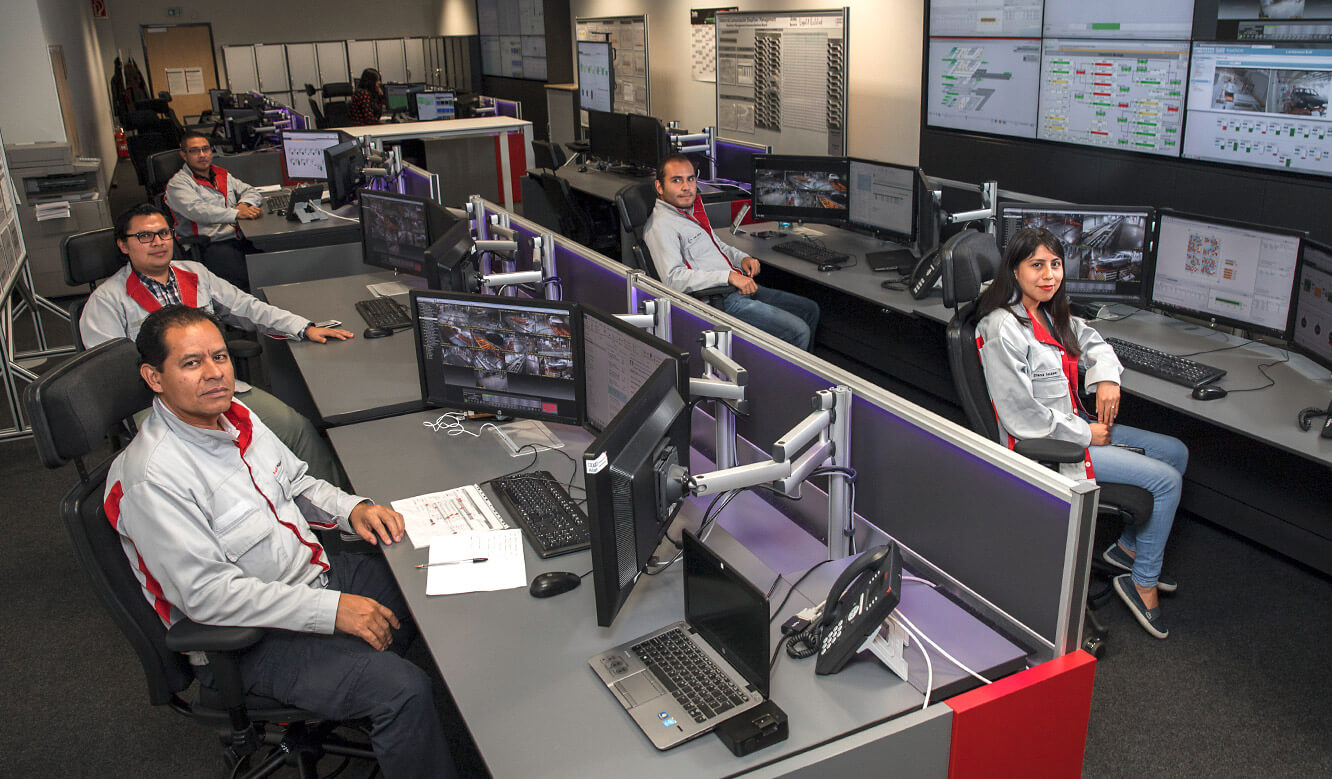 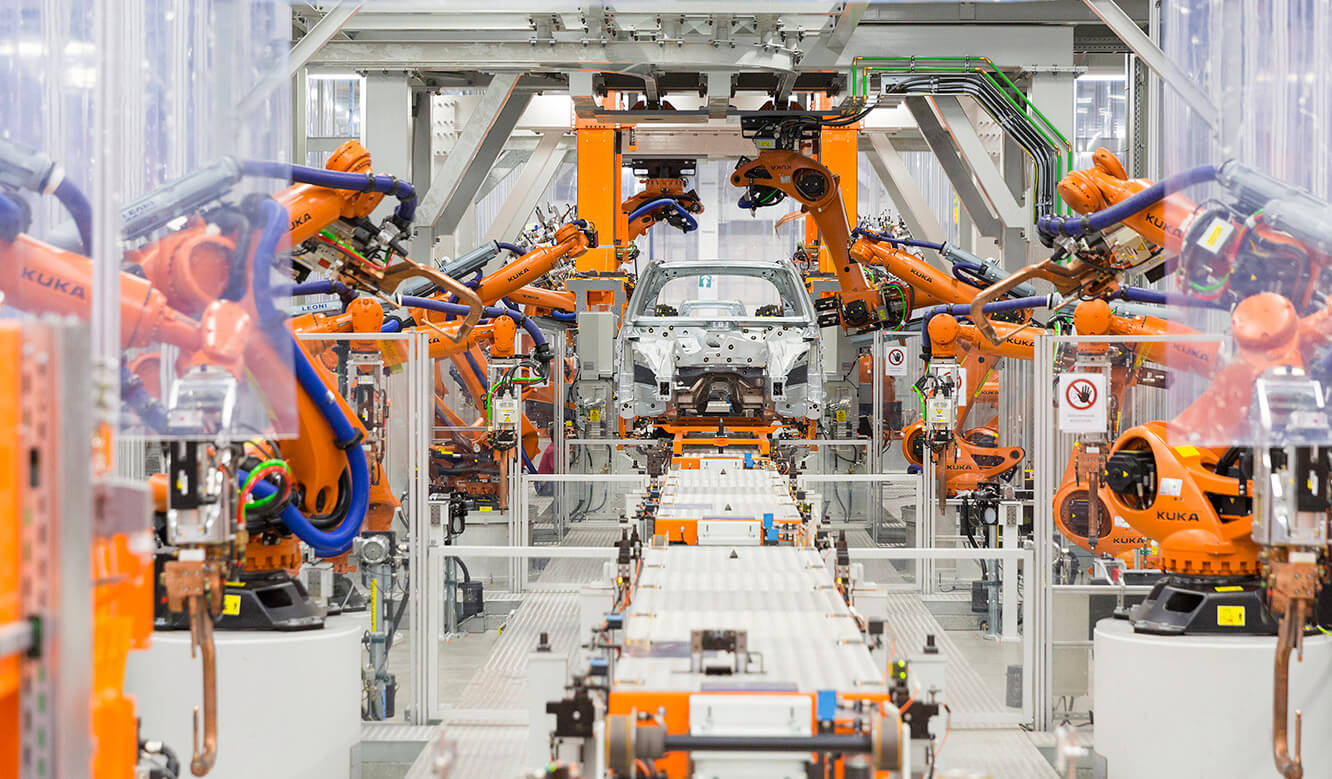 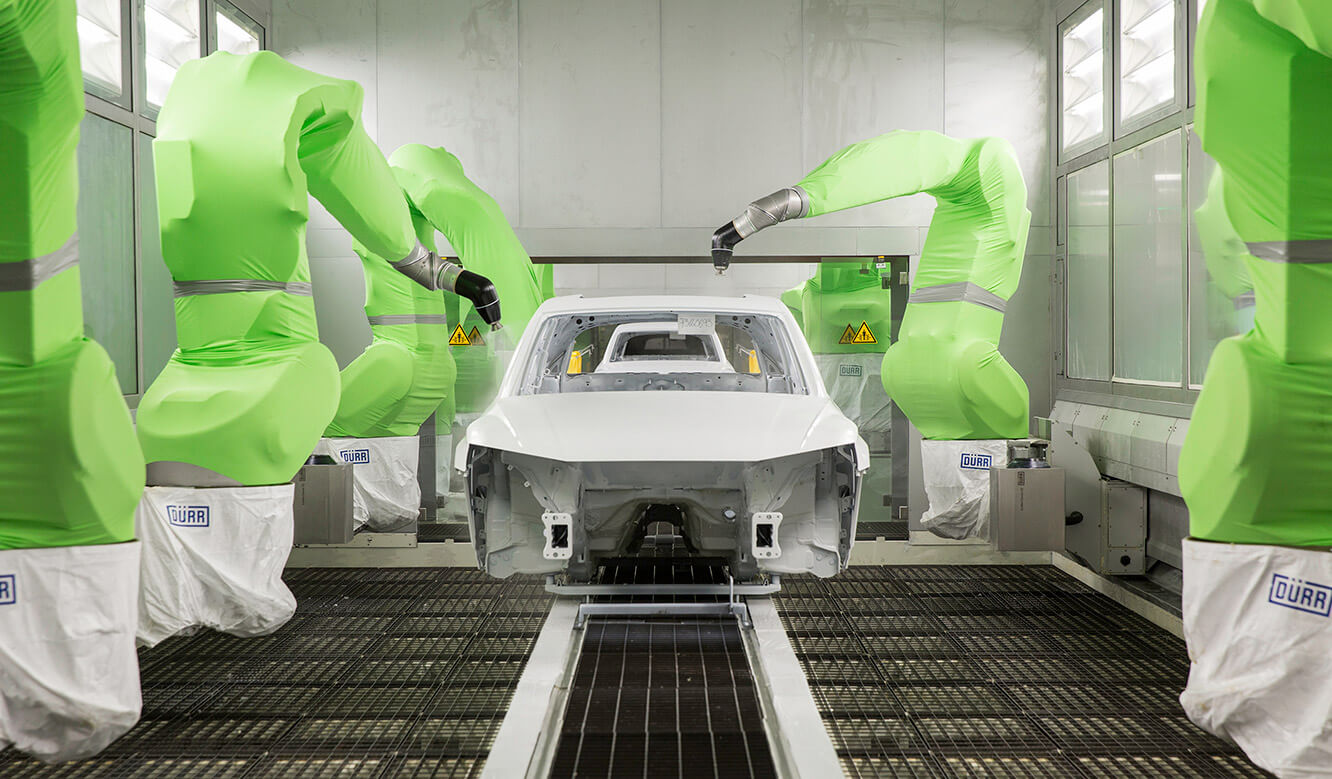 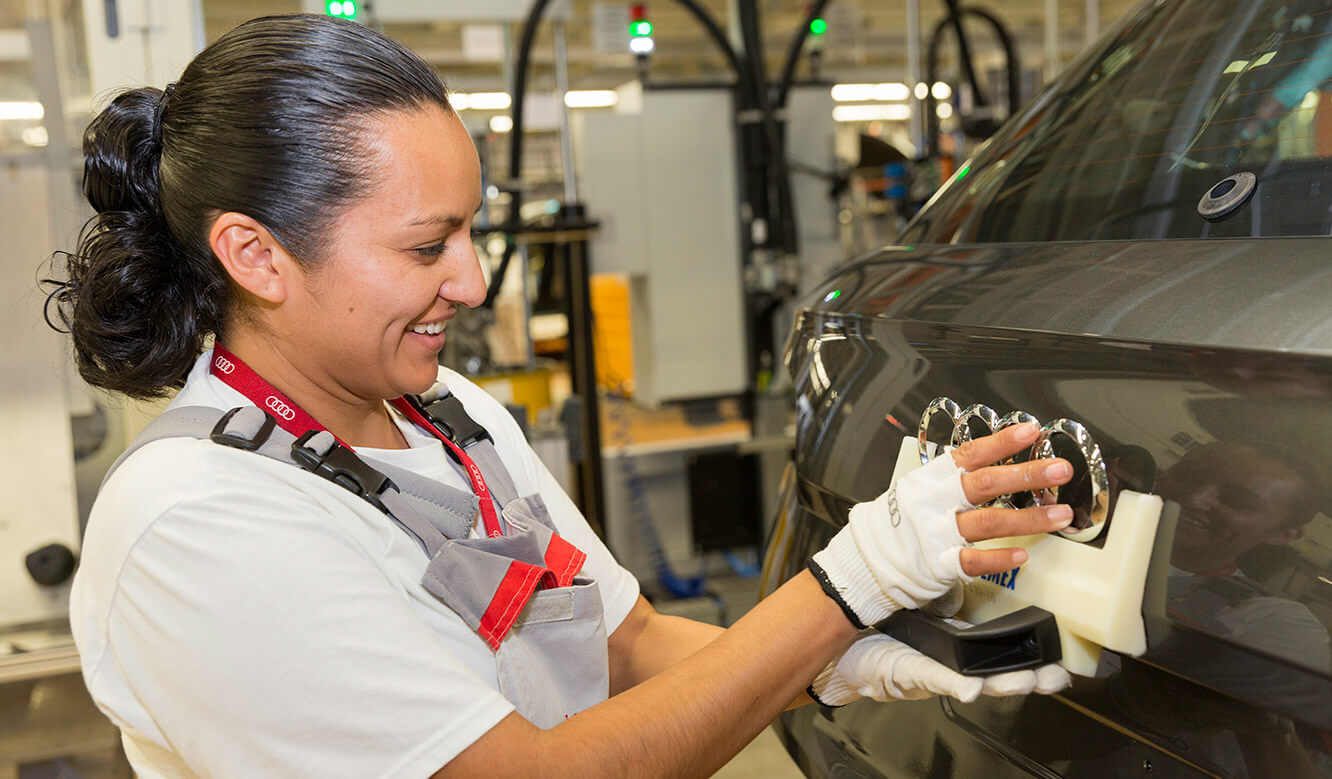 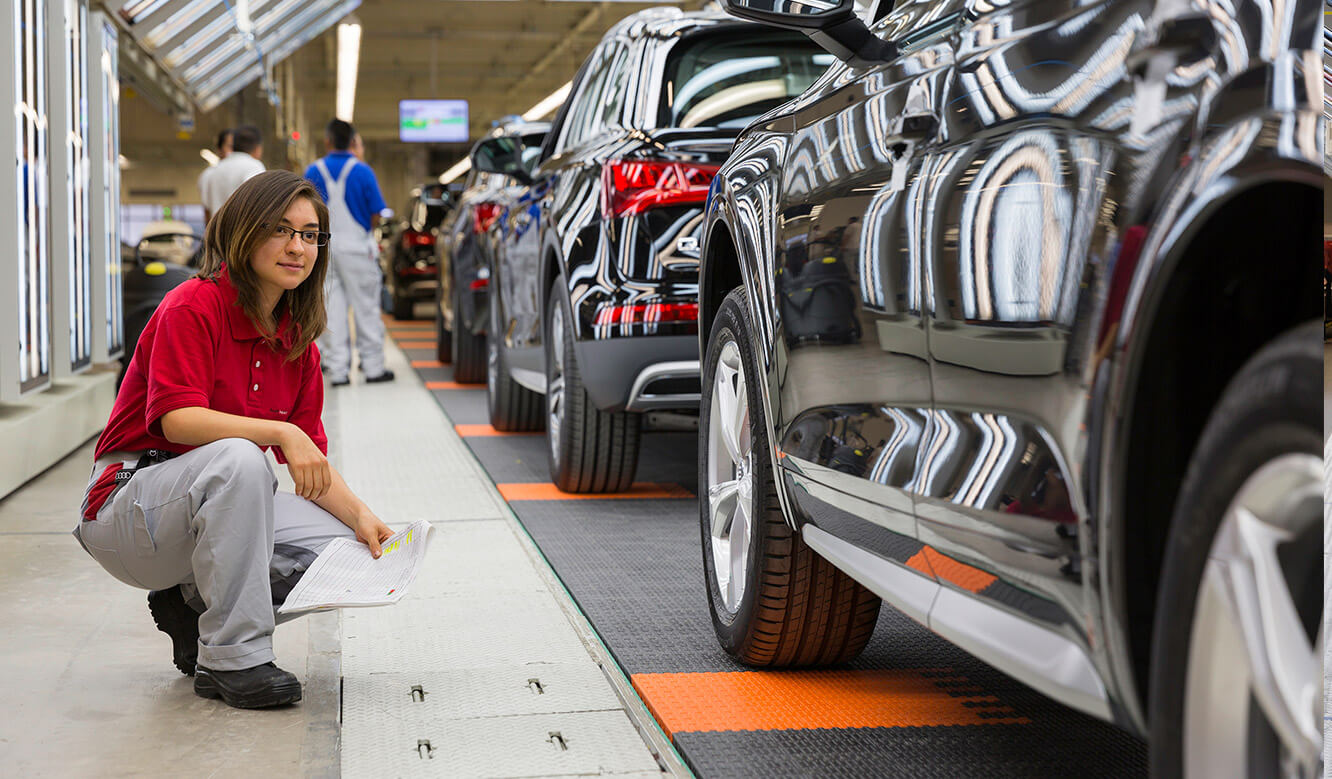 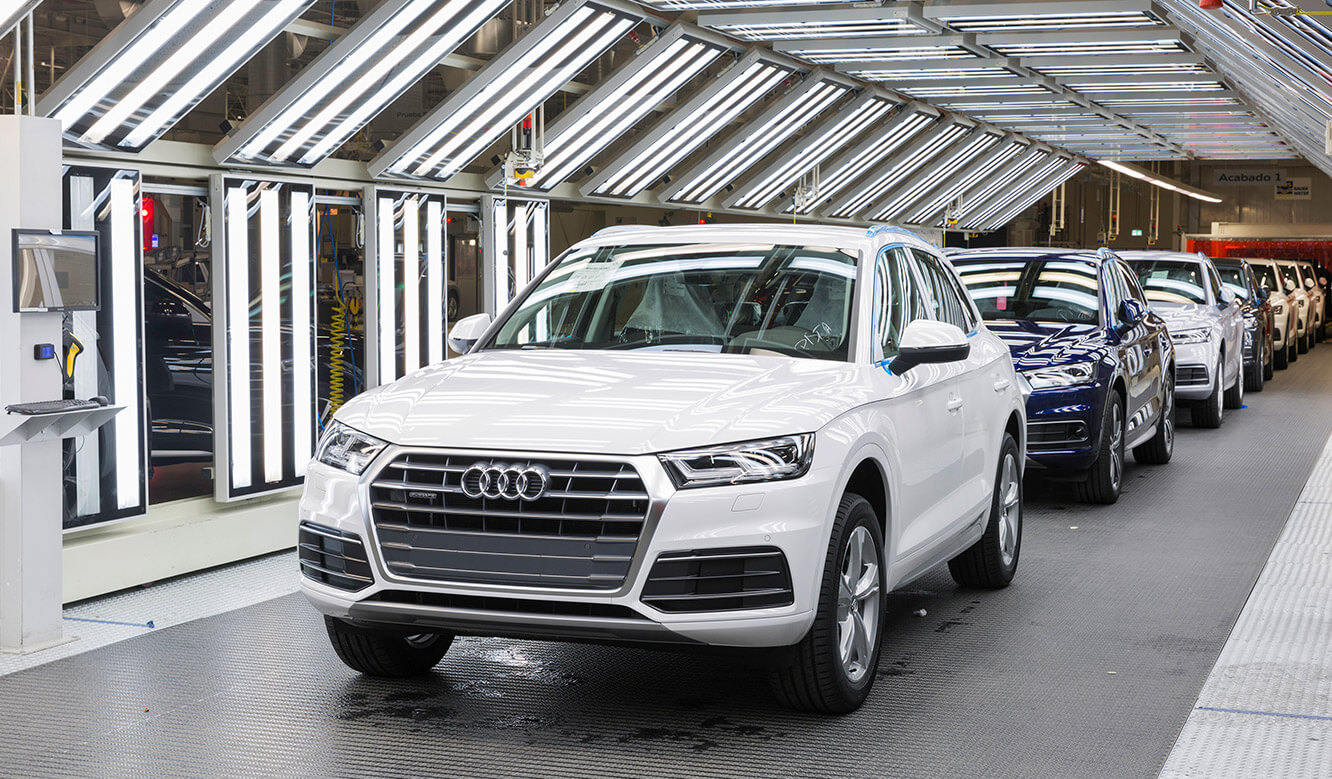 Photo 1 | © AUDI AG | JST control room workstation: A total of 35 operator workstations, designed on the basis of current occupational health recommendations for work in control rooms, were installed by JST in the Audi production control room in San José Chiapa, Mexico. Ergonomic aspects played just as much a role as a special demand for high availability technical solutions.

Photo 2 | © AUDI AG | The Audi site in San José Chiapa lies 2,400 meters above sea level and is the most modern Audi plant worldwide. It has an annual production capacity of 150,000 Audi Q5s.

Photo 3 | © AUDI AG | JST Videowall: Jungmann Systemtechnik was able to install a total of seven large display walls with corresponding wall panelling in Mexico. The employees monitor the entire production process of the Q5 models for you – from logistics to final assembly.

Photo 4 | © AUDI AG | JST control center: Thanks to the technical concepts of the JST control room specialists, the team at the production control room in Mexico can be connected with the Audi Ingolstadt control room, for example. The German colleagues can thus remotely connect to the plants on the other side of the ocean.

Photo 5 | © AUDI AG | JST Technik: Ergonomically designed workplaces are just one of the many advantages of the Audi control room. The consolidation of individual interfaces now enables effective and direct communication between the various control centers.

Photo 6 | © AUDI AG | JST large-display technology: For optimum TeamView in the control room, large display walls were installed on which – as here – processes and camera images from production, for example, can be monitored. As needed, the displays, which are optimised for 24/7 use with their ultra-narrow frames, can also be used to create large overview images, so-called BigPictures.

Photo 7 | © AUDI AG | JST Technik: Thanks to the MultiConsoling® system with its intuitive 3D user interface, the operator team has easy access to all the systems in the control room. Internal training at the Audi Training Center, which was also integrated into the San José Chiapa plant, ensures reliable operation of the new systems.

Photo 8 | © AUDI AG | This station is also monitored by the staff at the production control room: In the body shop, latest-generation robots assemble the bodies of the Audi Q5 using state-of-the-art technology.

Photo 9 | © AUDI AG | Five control centers combined in one central control room: In addition to logistics, IT infrastructure, the production system and body shop, the paint shop in San José Chiapa, which is one of the most environmentally friendly in the world, also falls within the control room.

Photo 10 | © AUDI AG | The final touches: An Audi employee at the Mexico plant assembles the famous four rings on a Q5 model.

Photo 12 | © AUDI AG | The right colour? The right country of delivery? Glacier White Metallic, destination: Germany. All information required for the production of the vehicles is gathered in the new central control room.

“The central production control room is the most modern in the Audi production network and is symbolic of the Audi Smart Factory,” says Peter Kössler, Member of the Board of Management for Production at AUDI AG. In an area of 400 square meters in San José Chiapa, Mexico, a total of 105 employees monitor the creation of the Audi Q5. To ensure premium quality standards, Audi connected the plant in Mexico globally with other locations in the Audi production network. The automobile manufacturer from Ingolstadt was supported in this gigantic project by the JST control room specialists.

More than 150 displays, seven large display walls, 35 ergonomically designed workstations and high availability technical equipment are available to the control room team in the Mexican production control room – supplied and installed by the Jungmann experts. The Audi employees practically have a bird’s eye view to monitor the various steps in the production process of the Q5 premium SUV. But it is not only the dimensions that make the new control center so extraordinary.

Detecting the smallest deviations early on

Jochen Fichtner, Head of IT at Audi Mexico, explains the remarkable innovation that the German carmaker has implemented at the Central American site: “For the first time, this central control center combines five control rooms that are often physically separated at other Audi sites. “By merging individual interfaces, the various control centers can communicate efficiently and directly with each other. This enables us to detect the smallest deviations at an early stage and to react in time.”

In order to be able to act proactively as desired, the operators are supported by the JST software PixelDetection®. In combination with the MultiConsoling® operating concept, the reliable alarm medium monitors the processes and displays in the background. If there are any deviations from the previously defined parameters, the employees at the automobile manufacturer’s control room will be alerted clearly via the installed AlarmLight. You can act proactively before any disruption occurs. The warnings can be given both acoustically and visually, for example by colour changes or pulsating colours.

The JST experts were also able to meet another requirement of the vehicle manufacturer: Digitisation and networking of the various global Audi plants are to be accelerated. With JST technology, it is therefore possible for the Audi control room in Ingolstadt, Germany, to connect remotely to the production control room in San José Chiapa in order to provide technical support.

Head of IT Jochen Fichtner is convinced. “This control room, which monitors and controls logistics processes, IT infrastructure, production system, body shop, paint shop and final assembly from one location, has benchmark character.” 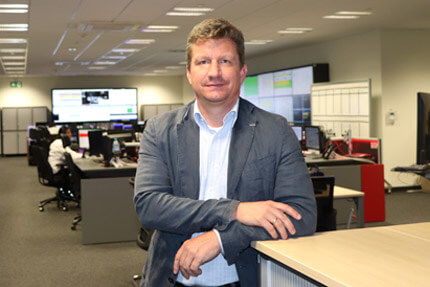 "By merging individual interfaces, the various control centers can communicate efficiently and directly with each other. This enables us to detect the smallest deviations at an early stage and to react in time."

Head of IT at Audi Mexico 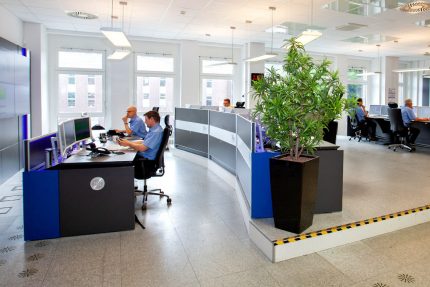 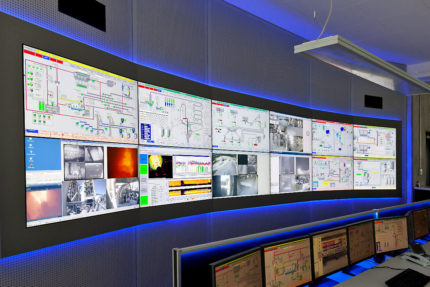 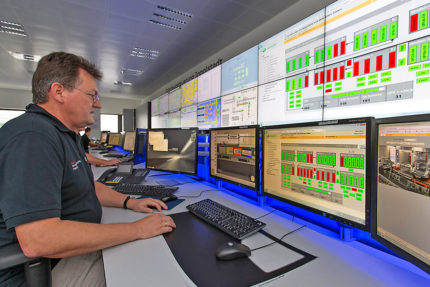