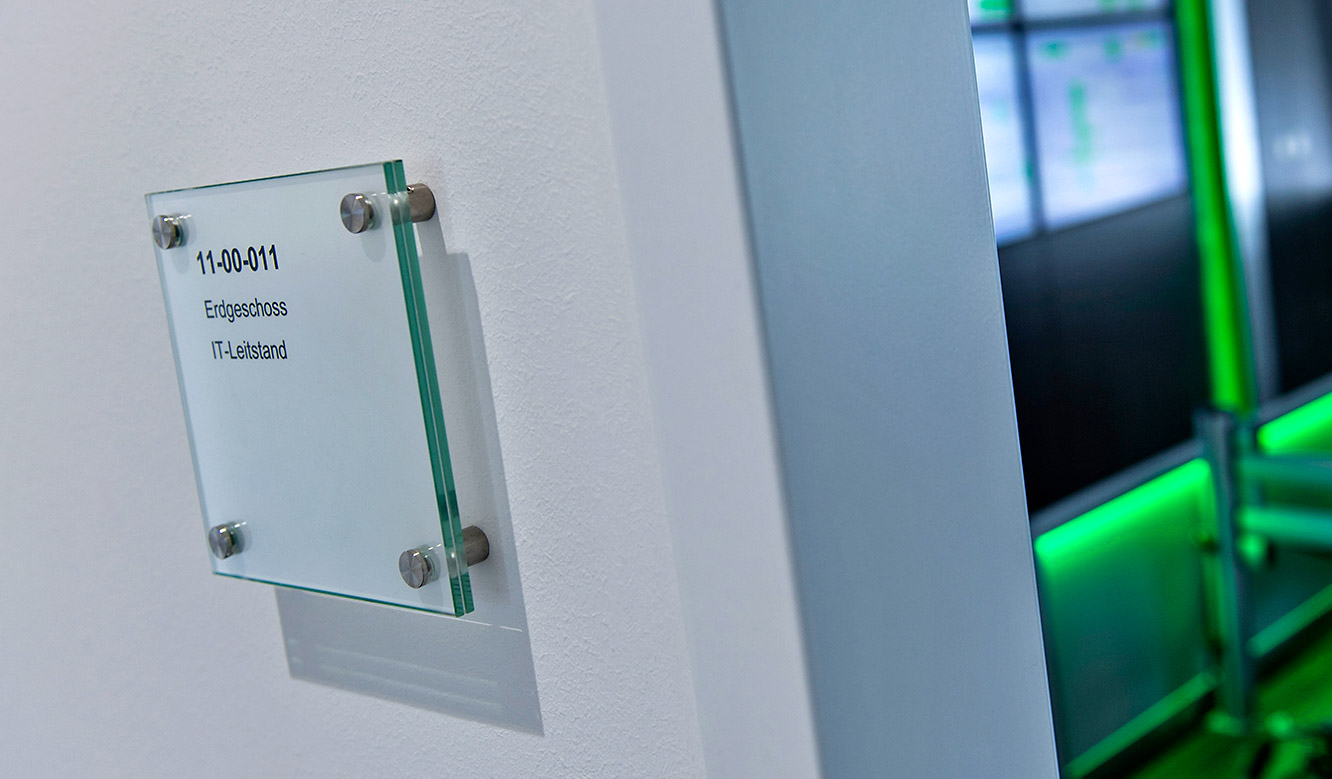 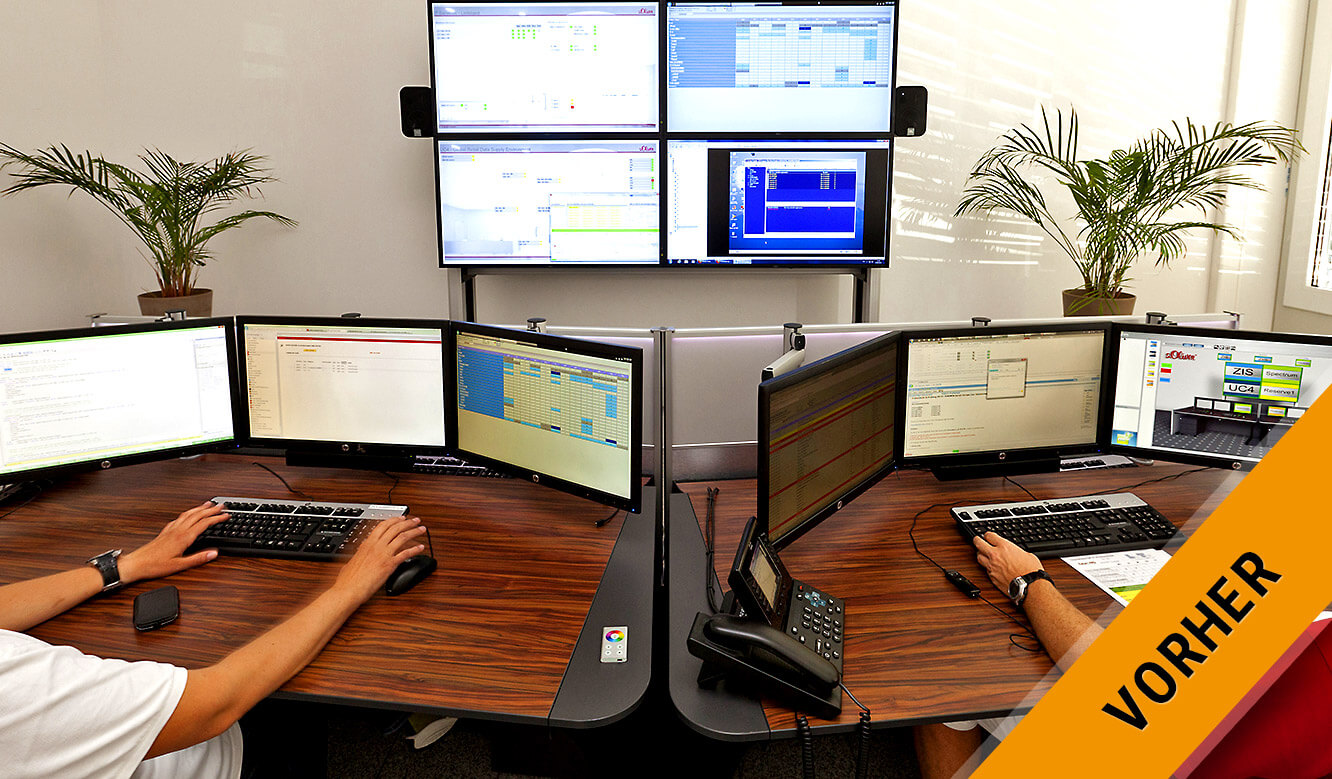 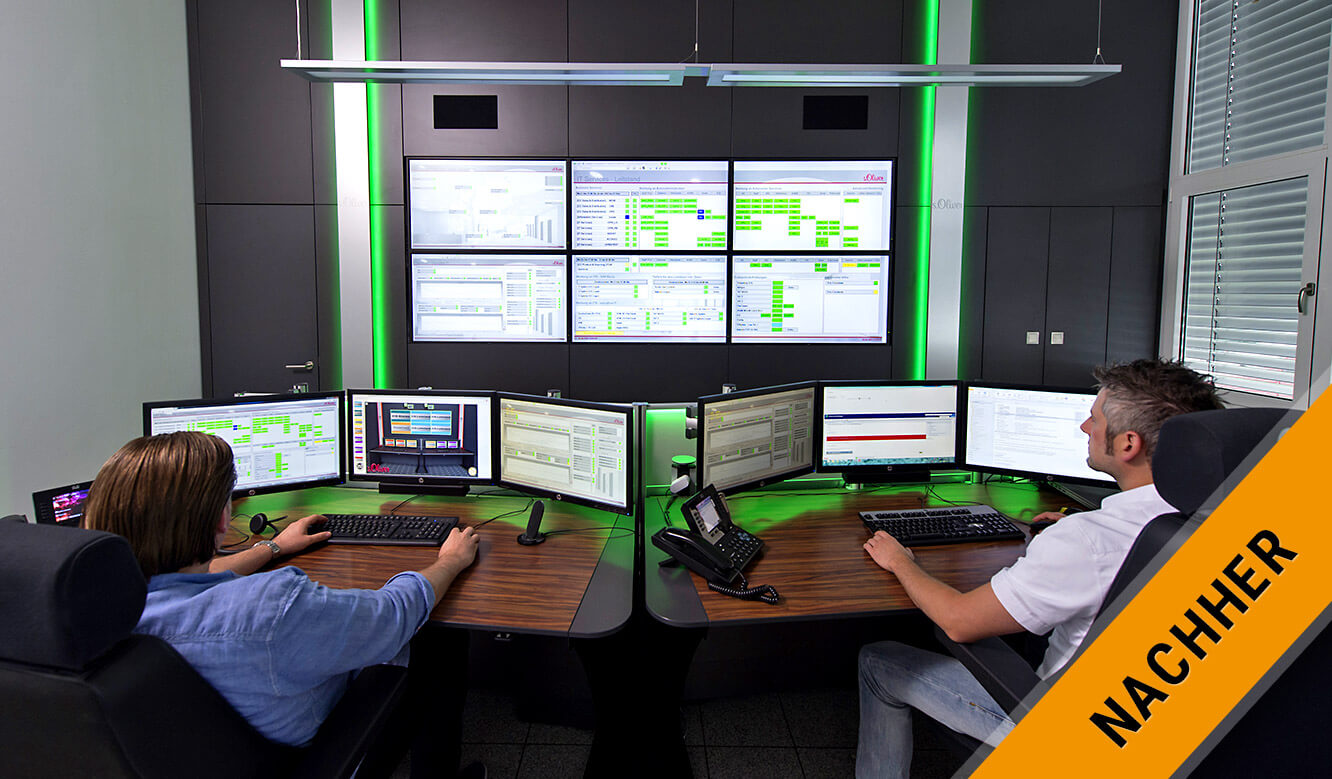 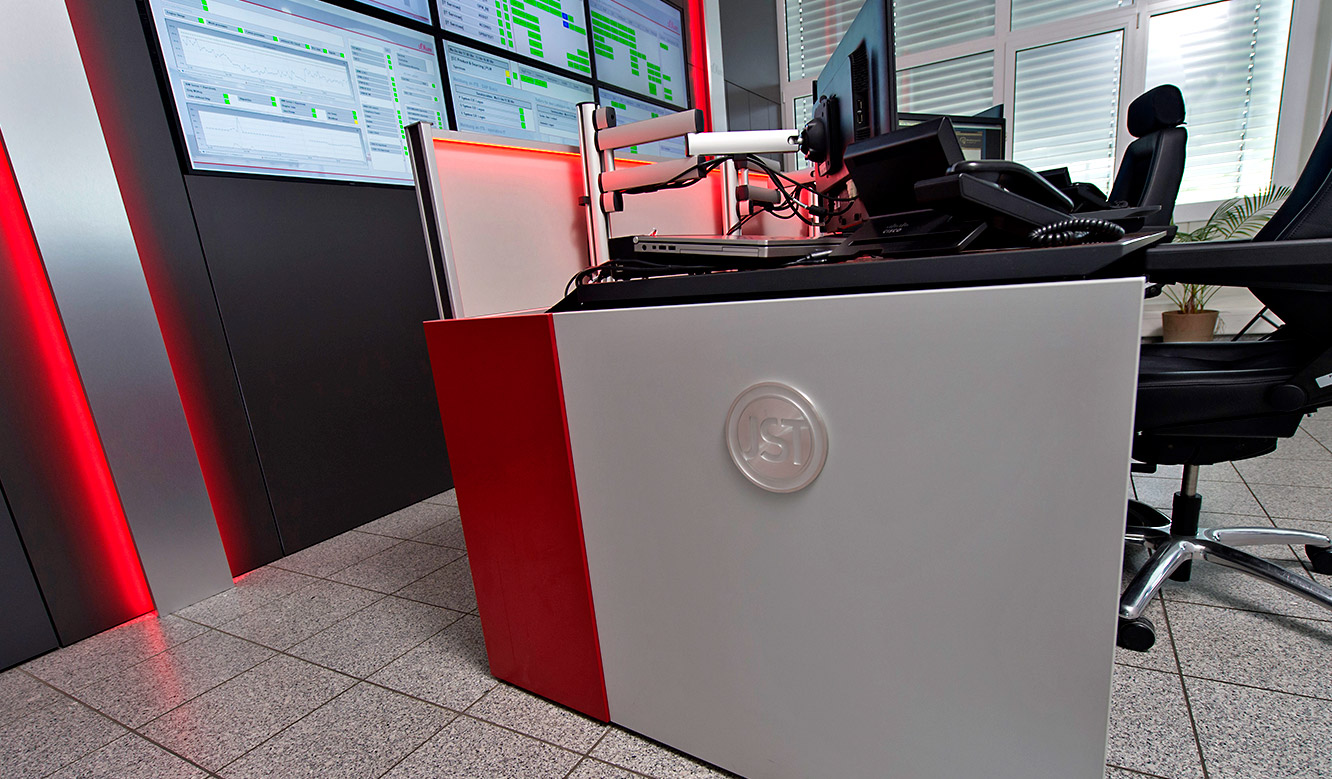 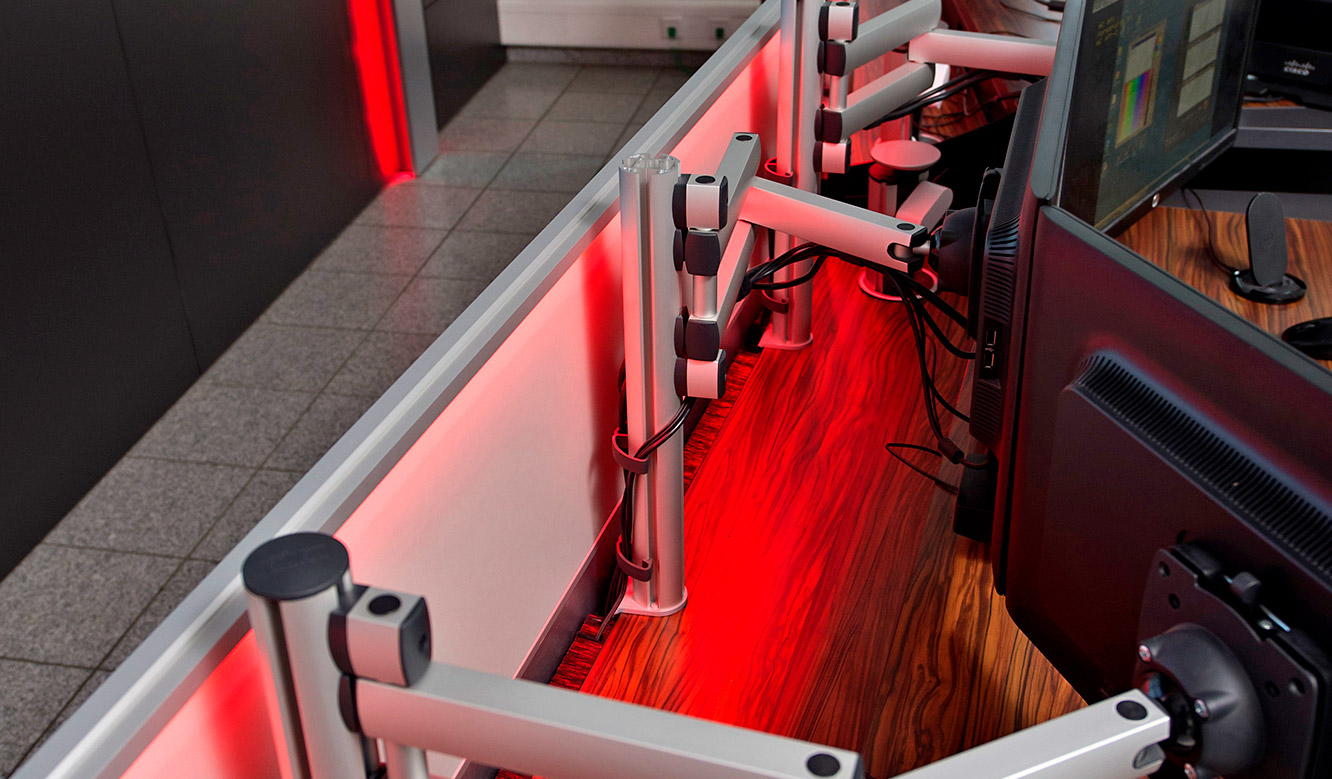 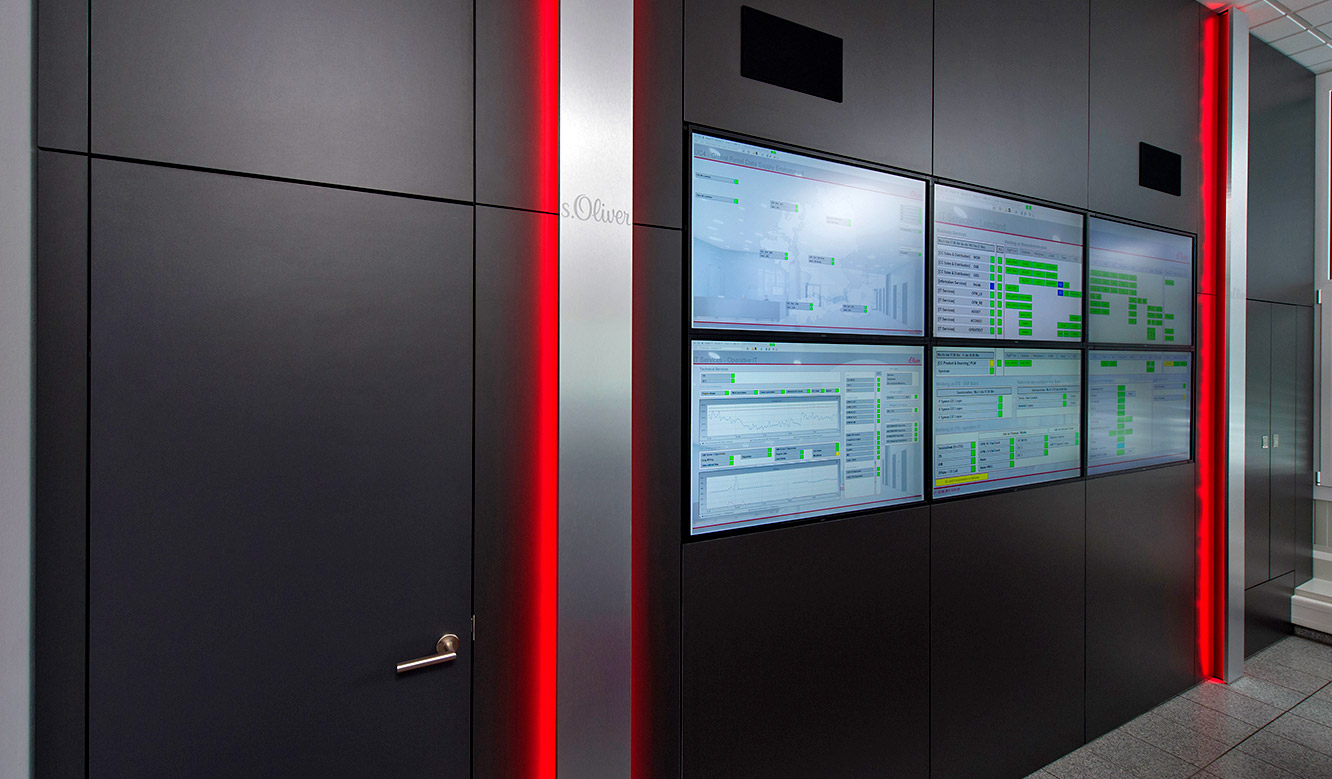 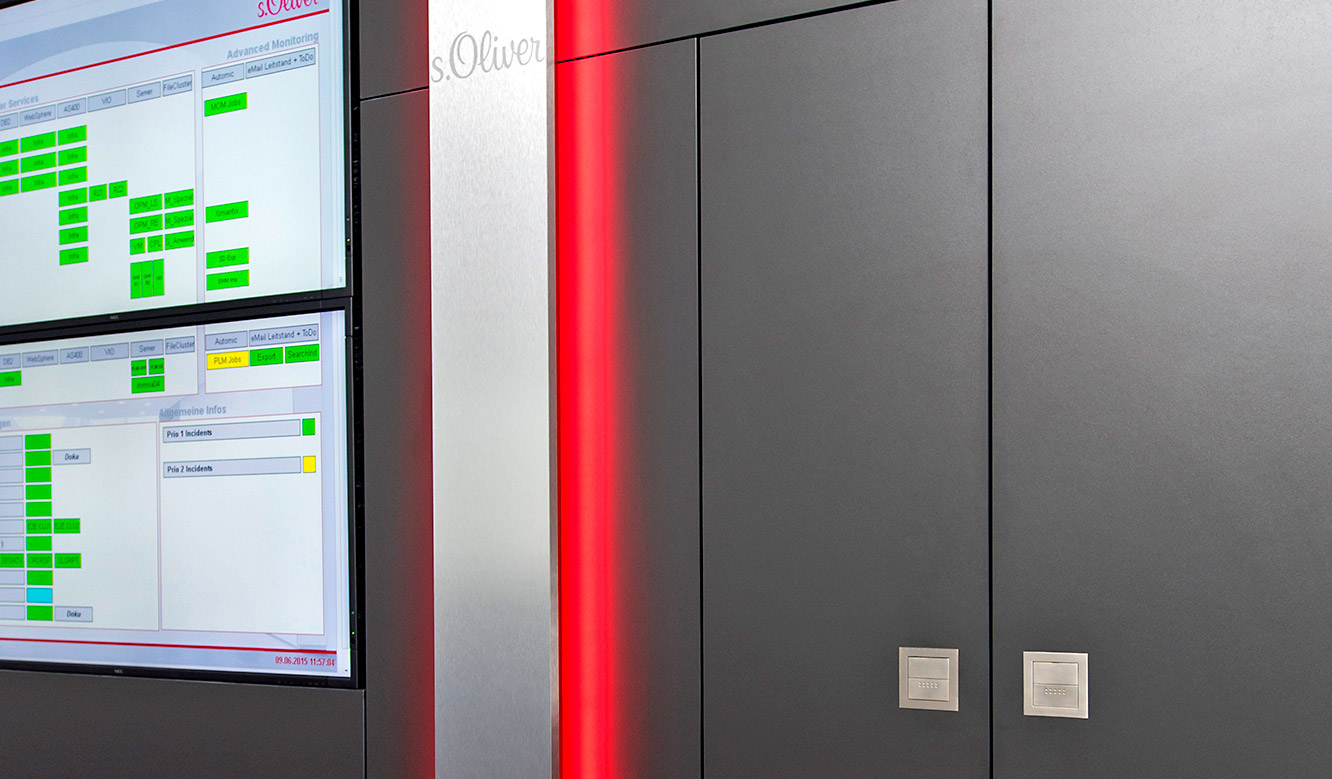 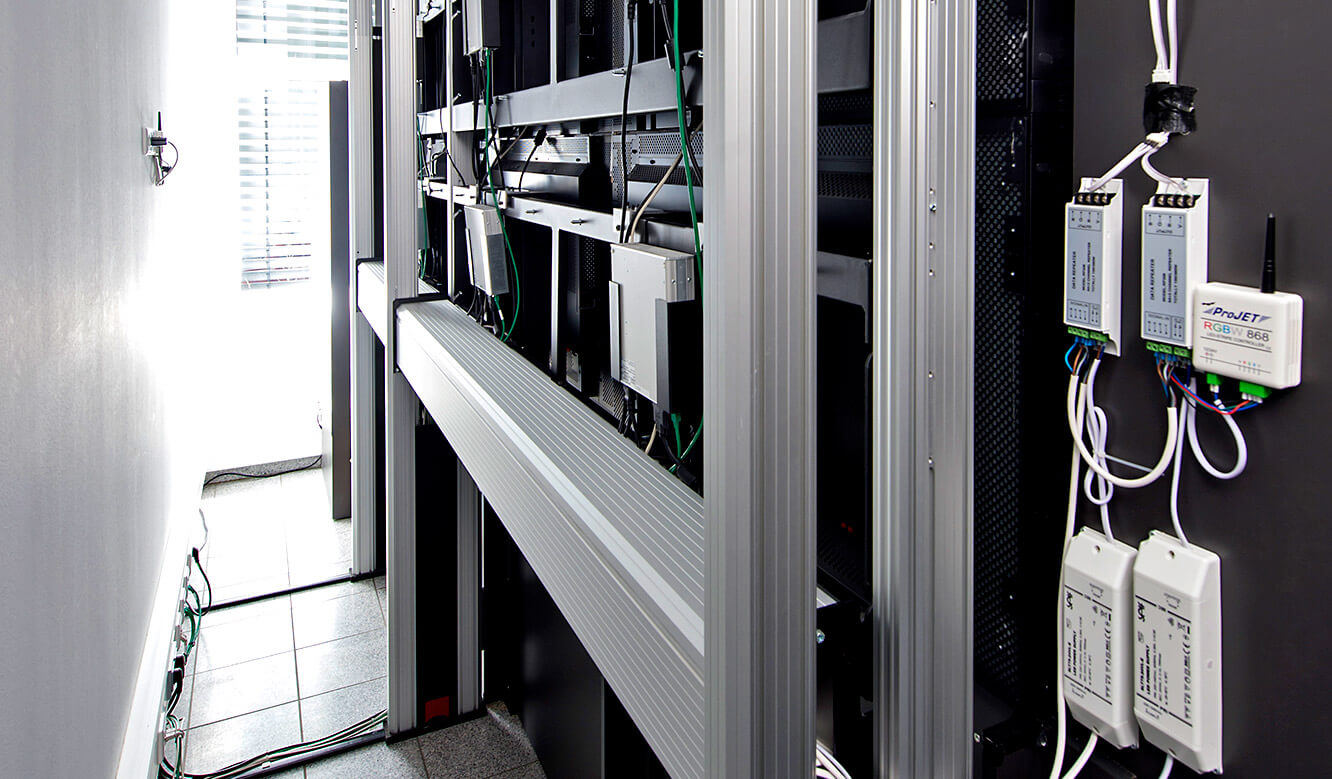 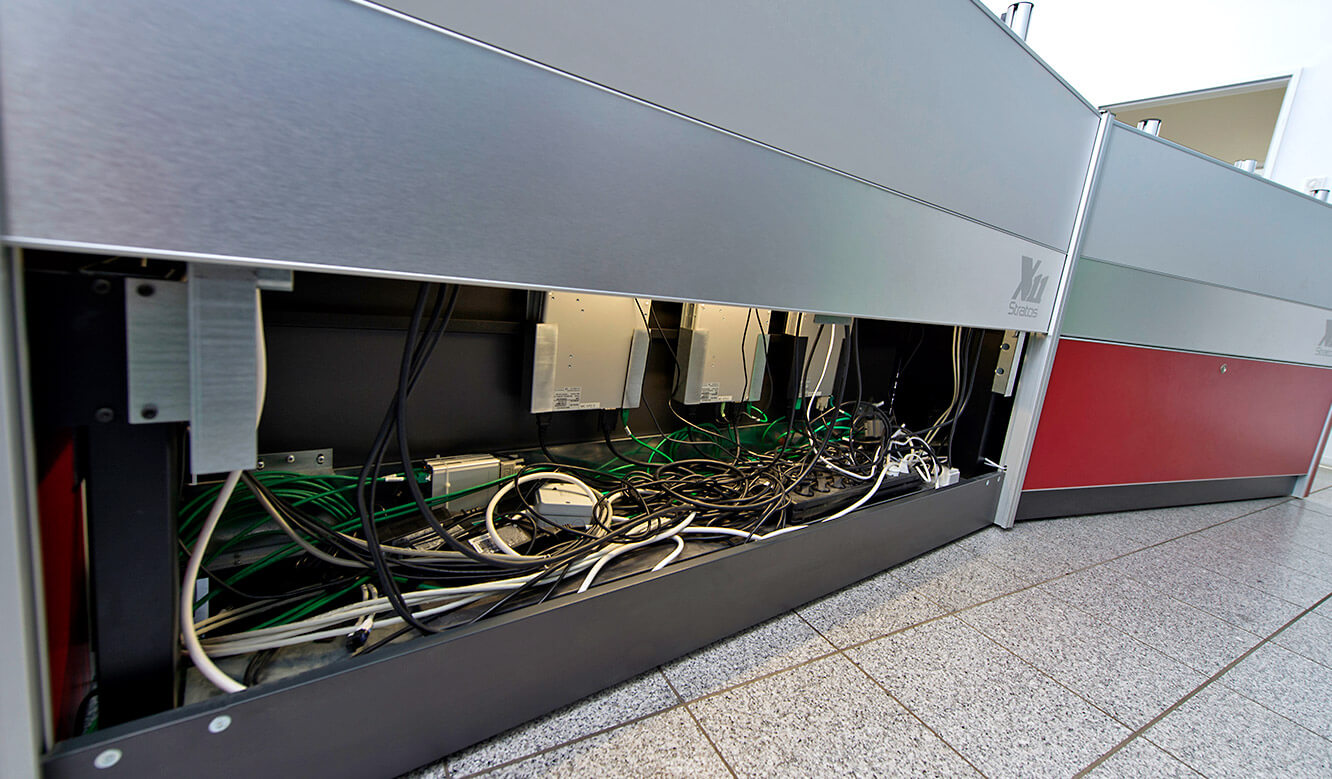 Photo 1 | JST Large screen wall: The design strips with high-quality aluminum brushed surface and the AmbientLight give the sound-absorbing large screen in the s.Oliver control center the unmistakable JST look.

Photo 2 | Entrance to the new control station - behind the door is a technically and ergonomically excellently coordinated concept.

Photo 3 | Hardly recognizable: This is the view into the s.Oliver control center before the upgrade with a large screen wall consisting of four 46-inch SlimLine LC display including display rack.

Photo 4 | JST control room: View into the s.Oliver control room after optimization. The large screen wall was supplemented by two additional displays. In addition, the new projection screen cladding not only offers optical advantages, heat and noise are now significantly reduced in the control room.

Photo 5 | JST large screen wall: Modern Alarm management in the control room - with the JST software PixelDetection® the right information comes to the right place at the right time. The operator team is kept informed of current alarm situations via the large screen wall and AmbientLight.

Photo 6 | JST Operator desk: The special Stratos X11 Command Desks can be adapted to the operator's needs by means of infinitely variable electromotive height adjustment; for example, switching between sitting and standing to relieve back strain.

Photo 9 | JST Power-Port-Data Module: The Stratos X11 OperatorDesks have been equipped with Power-Port-Data pull-outs, so that users have all desired supply connections available directly at the workstation.

Photo 10 | JST large screen wall: Directly next to the displays on the large screen wall is a door that provides access to the newly created room-in-room - a special JST solution that keeps heat and noise away from the control room.

Photo 12 | …thanks to an integrated cabinet with hinged doors it also offers additional storage space.

Photo 13 | JST Large screen wall cladding: Typically JST - attention to detail is also paid to the highest quality. Here for example the brush seal that protects the displays from dust.

Photo 14 | JST Technology: The inspection walkway in the technical room shows the rear views of the large screen displays, which can be aligned with millimeter precision in the JST display racks.

Photo 16 | JST Organization: When the duct is closed, the cable harnesses disappear and the viewer is presented with a perfect picture. Another advantage: All components are safely protected against dust.

Photo 17 | JST MultiConsoling®: The monitor displays the myGUI-User interface for the MultiConsoling®. Good to recognize: Whereas previously only one console was used per workstation, thanks to the positive experience with the innovative JST technology, this has now been increased to a total of three consoles per workstation, i.e. each screen in the s.Oliver control center now runs via MulitConsoling®.

Photo 18 | JST MultiConsoling®: When looking behind the large screen wall clearly visible: each display has a MultiConsoling® receiver, to be able to connect any computer with any display.

Photo 19 | JST MultiConsoling®: This also applies to the generous supply rooms of the Stratos Command Desks - here you will find a MultiConsoling® receiver for each monitor of the workstations in order to switch any computer to any screen.

Photo 20 | JST Software: Modern Alarm management in control rooms - with PixelDetection® the right information comes to the right place at the right time. The operator team acts efficiently and can concentrate on the really important things.

Update for technology and optics in the monitoring control center

“Larger, more attractive, cooler” – with a sequence of meaningful comparisons Marius Förster sums up the advantages of the new s.Oliver control room. After the company had already placed the installation of its new control station in the hands of Jungmann Systemtechnik in 2013, they have now placed their trust in the JST experts again. In a second step, the update at the company headquarters in Rottendorf was also transferred back to the Jungmann team. “A perfect indicator for the satisfaction of our customers,” says JST Managing Director Carsten Jungmann, delighted with this new project at the fashion and lifestyle company. Proactive Software, ergonomic furniture and an intuitive control system of the workstations and the large screen wall provide optimal conditions for monitoring s.Oliver Services in the control room.

“With the new control center we are optimally equipped for the future”, Marius Förster is sure. The manager of the operative IT department at s.Oliver had clear goals that were to be realized with the expansion of the control center. 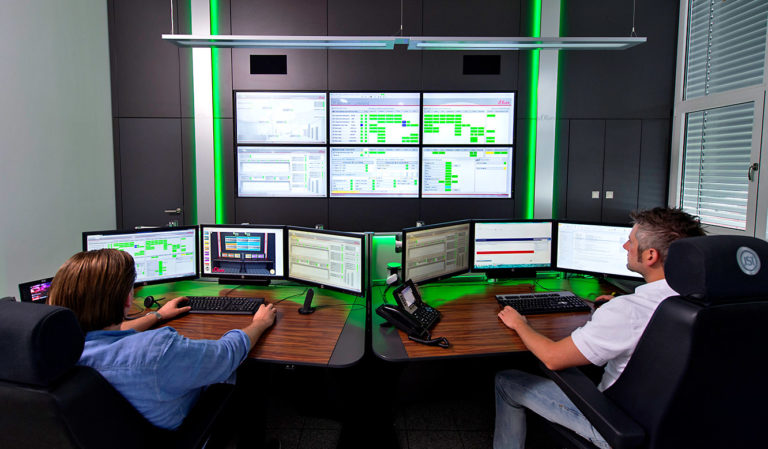 JST control room: View into the s.Oliver control center after optimization. The large screen wall was supplemented by two additional displays.
In addition, the new projection screen cladding not only offers optical advantages, heat and noise are now significantly reduced in the control room.

A constantly increasing number of services must be provided in monitoring. In order to maintain a permanent overview here, the large screen wall, which was previously equipped with four displays, was to be supplemented by two additional monitors. Marius Förster has clear ideas for the use: “The main dashboard is supposed to be constantly shown on four displays. Two additional demand monitors can then be used according to the current situation”.

In this context, it was already clear to the person responsible for the control room during the planning stage: “We will have a problem with the heat there”. For the JST specialists, this is a topic that leads to challenges in many control rooms. The ideal solution: Behind a special cladding of the large screen wall, a room within a room with outsourced computers was created. Heat and noise emissions are therefore no longer an issue. 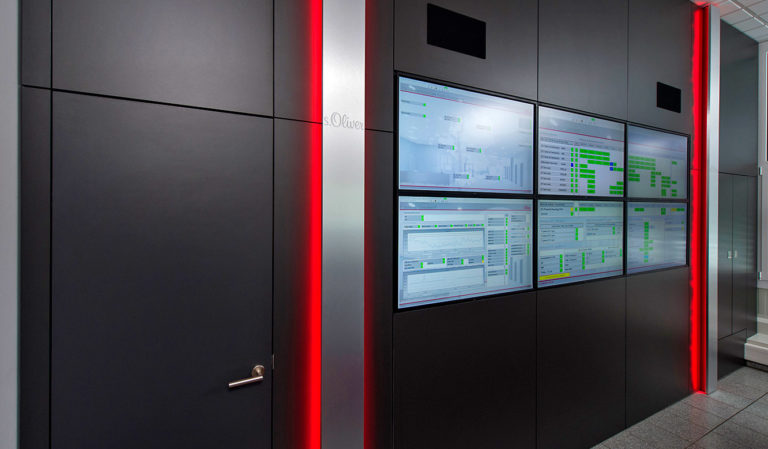 JST large screen wall: Directly next to the displays on the large screen wall is a door that provides access to the newly created room-in-room – a special JST solution that keeps heat and noise away from the control room.

With a second upgrade, the operators of the s.Oliver control station have now also created perfect working conditions with regard to the operating software: Thanks to the JST-MultiConsoling®, rigid, cumbersome switching or even changing of workstations is now a thing of the past. All workstations and the large screen wall can now be conveniently controlled and operated via the myGUI software.

JST MultiConsoling®: The monitor displays the myGUI user interface for the MultiConsoling®. Good to recognize: Whereas previously only one console was used per workstation, thanks to the positive experience with the innovative JST technology, this has now been increased to a total of three consoles per workstation, i.e. each screen in the s.Oliver control center now runs via MulitConsoling®.

Intuitive operation - only one mouse and keyboard for many monitors

“This mouse-hopping concept completely meets our requirements,” sums up Marius Förster. With MouseHopping, the mouse and keyboard are automatically switched to the workstation monitors or large screen displays and thus to the corresponding computers when the mouse is moved. Switching is now quick and intuitive, as there is no longer any need for complicated hotkey entries.

Marius Förster also points out the advantages of the proactive JST Monitoring Software PixelDetection®: “Especially when the control center is occupied by only a few employees, the red flashing warnings via the ambient light provide a quick overview – no alarm can be overlooked”.

Today s.Oliver is one of the leading fashion and lifestyle companies in Europe. Nine product lines are implemented by various design teams in twelve collections per year. The company runs a total of 289 of its own stores, 412 stores together with partners and is represented in 3,108 shop-in-shops and 3,876 areas. Internationally s.Oliver is available in over 30 countries. More than 7,400 people are employed worldwide, of which approx. 5,200 in Germany.

In 1969, company founder and owner Bernd Freier opened his first store under the name “Sir Oliver” at Herrnstraße 5 in Würzburg. The name “Sir Oliver” was chosen after the novel hero Oliver Twist and was later changed to s.Oliver. On 27 April 1979, the mark was registered at the German Patent and Trade Mark Office in Munich. 2014 s.Oliver could look back on a successful 45-year company history. 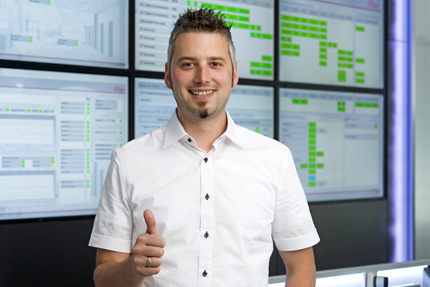 "With the new control center we are optimally equipped for the future."

Manager of the operational IT-Department 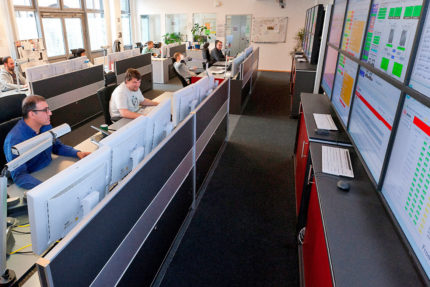 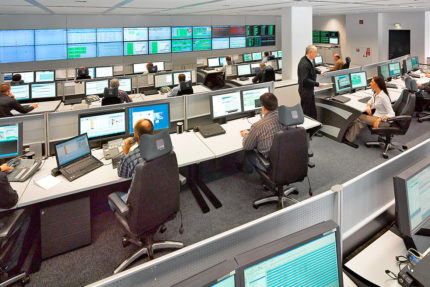 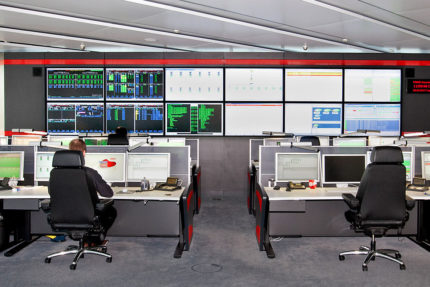 Visit the Europe-wide one of a kind


Visiting the control room simulator is free of charge.
We ask for registration and reservation of dates.


the whole world is currently facing unprecedented challenges.
The severe restrictions of our everyday life bring about major changes in many areas of our working and private lives.

The information situation on diseases caused by the corona virus SARS-CoV-2 and their pandemic development is highly dynamic.
This situation makes a continuation of the event planning for the ko:mon unfeasible.
We are consequently making the difficult decision to cancel the congress this year.

Agenda and topics as well as contracts with speakers and partners are almost completely defined.
However, due to the many imponderables, it is impossible for us to continue with the necessary preparations, marketing measures and ticket sales.
We experience experts whose opinions complement each other, contradict each other, are modified, changed and rejected again.
Incisive measures are taken, to be tightened soon afterwards.
What seems sensible and suitable today may already be outdated tomorrow.
Based on this, we as organizers as well as our hotel team cannot guarantee a binding planning for the ko:mon.


We ask for your understanding for this procedure.
Our hope is that all of us, in solidarity and together, will overcome this difficult time and hopefully emerge strengthened as a society from this unprecedented crisis.

And finally an important note for you: Jungmann Systemtechnik is very alert in this special situation.
But we see no reason to panic.
Our solid financial base and stable order situation allow us to look to the future with great optimism.
The entire team at JST remains fully committed to maintaining the functionality of your existing control room through our reliably high level of service.
New control room projects will continue to be planned in the characteristic JST quality.
The close collaboration with our suppliers enables us to fulfill all supply agreements already made, even in the current situation.
With best wishes!

Your team from JST